Survivor Day: The One Year Anniversary of Paley's Recovery from Cardiac Arrest

"God is to us a God of deliverances; And to God the Lord belong escapes from death." (Psalm 68:20) 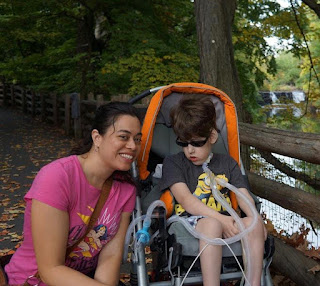 Yesterday, we celebrated our youngest son Paley's "Survivor Day." Paley along with one of his brothers lives with a rare condition called Myotubular Myopathy and requires quite a lot of medical equipment, such as a wheelchair and a ventilator. On the evening of August 8, 2015, I tucked our five-year-old Paley into bed as usual while the rest of us played in the next room. It had been a while so David suggested I check on Paley, and I felt a pang in my heart that it had been a little too long since I had last peeped in on him.

I hurried to his door, panic rising as I noticed the pulse oximeter (a machine which shows his heart rate and blood-oxygen saturation levels) was on the blink when the reading suddenly flashed on the screen in red "0/0" signifying that his heart had stopped and there was no oxygen in his blood. While the rest of the family was lightheartedly whiling away the evening, secretions had plugged Paley's airway, overstraining his heart, but the alarms had failed. I didn't even know for certain how long he had been like that, and in these kinds of situations every second counts...minutes are too late.

The sinking of my heart as I screamed and rushed to his side, the wrenching in my stomach as I pulled his ashen, unconscious body from the bed and laying him on the ground while yelling for David to call 911, the tears flooding my cheeks, the pleading with God while performing CPR are all still as vivid as fire. I remember having to battle the part of my own mind that wanted to indulge in sickening despair and self-hatred for allowing this to happen on my watch. Vaguely, I could hear David chiding me in the background, "Stop crying! Cry later!" I had to stop being selfish and focus on Paley.

In my unvoiced prayers, I tried to bargain with and manipulate God. He answered me gently and sensibly with the truth, truth about who He is and about who I am in Him. "Father, I'll die of a broken heart!!" "No, my dear, little one. You know that you won't. You'll live on for your children." "Yes, you're right. I'll live but I'll definitely go into a wretched depression. I'll be a miserable person never be able to share the gift of my joy again. I'll probably never smile or laugh again!" "You know that isn't true either. Yes, you will suffer greatly, but I will bring you through it and you will still be able to know joy." "But it's all my fault for not paying better attention. I'll be guilty and blame myself forever! I'll be useless to you, to anyone I might have helped! No one will believe in me and I'll never be able to serve and minister to others again." Even as I thought these things, I knew they were wrong. Again I felt the Lord speaking in my heart, "You know very well that there is no condemnation in me. I will only expand your ministry and give you even greater opportunities to serve me through this loss." Thus every reason, every excuse for why God had to do what I wanted fell away until I fully came to terms with the truth that whatever happened, He would use it for His glory, even if it wasn't in the way I wanted. At last, with my spirit, calm and resolved, and with my hands pressing on Paley's chest, I looked upward and said, "I'm looking for 'Yes' until you say 'No.' I have to try my hardest, so I can't give up until you to tell me 'No.' That's when I'll stop. Then I'll accept it."

By this time, I had lost track of how many compressions I had done, but my arms began to tingle as if my body was instructing me "Now compress," and then a breath would build up in the back of my throat urging me "Now breathe," and as I exhaled with my lips on Paley's trach tube I experienced a startling sensation between my body and his, which I understood in that one moment as "Life went into him!" And I knew that I wasn't the source or cause of that "Life" but rather it was as though I witnessed "Life"--not my own yet within me--transmit from my lungs into Paley's lungs. That was when he began to sustain his own heartbeat again.

Soon the paramedics arrived and we were on our way to the ER. He still had not regained consciousness, our fears were great, and all we could do was continue to pray and ask friends to pray. I still hadn't forgiven myself, but the great sense of love and compassion from our friends and family helped me to keep helping Paley.

Below is the update I posted on the following day.

Paley was wide awake between 3-4 am EST, alert and aware of me and his surroundings, looked at me when I said his name, tried to peek outside when he heard noises in the hallway. He "looked" and responded more like himself. Right now, his breathing and heart are fine, and he's in a deep sleep.
Just spoke with night attending who was confused why he's overventilated. I told her that he was switched to a cuffed trach when he has uncuffed. Apparently, the hospital vents are sensitive and alarm with uncuffed trachs. Waiting for the daytime nurse to get to my house at 8am to watch Reid so David can bring the home vent setup.

Everyone at home is doing as well as can be expected. The big boys were great helpers last night, waiting downstairs at the front door for the ambulance while David watched Reid and I continued to give Paley breaths with the Ambu. When the night nurse came yesterday, Lucian and Blaise wanted to come with David to see us in the ER. Everyone took turns kissing Paley and we all prayed together.
I haven't rested much at all. I think I dozed for 90 minutes. Too shaken up. Jumping up at every sound from Paley and rushing to his side to see if I can get him to communicate with me like he normally would.
As for me, I've entered a dark night of the soul, and it is excruciating. I'm not afraid because I've been here before, and I know that at the right time God will lead me back into the light again as he always has. In the meantime, I'm struggling, fighting against my own thoughts and emotions by reminding myself of fundamental truths. The victories are small but meaningful.

I'm thankful he is here, that CPR successfully revived him, that the emergency teams arrived at our house within minutes, that the Children's Hospital is only about ten minutes from where we live, that every EMT, fireman, doctor and nurse I've run into is kind and compassionate, that everything that happened since that awful moment has been about as good as it could be. I'm thankful for my family and neighbors, for my brothers and sisters in the Lord interceding on our behalf, for my MTM-CNM family who comprehends all of this like no one else can, and for all my friends who have sent messages of hope and love.
This is Paley about a year ago. I hope to hear him sing this again very soon even more clearly and loudly than before.