Memorials and Martyrdom: No Greater Love

On one of my runs in the city parks of New York, I came across this World War I Memorial, which seems appropriate to share on Memorial Day. 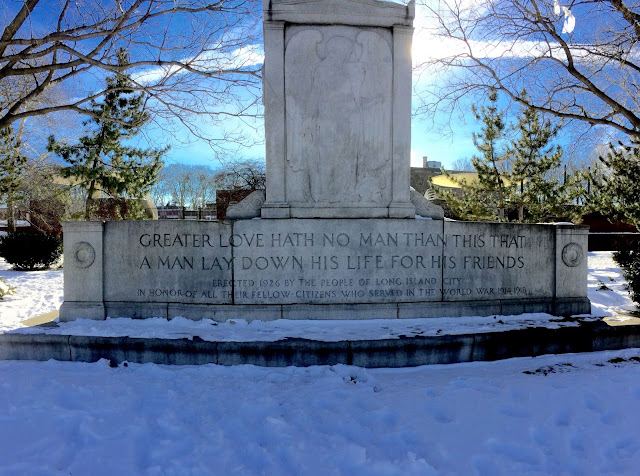 The words of the inscription—“GREATER LOVE HATH NO MAN THAN THIS THAT A MAN LAY DOWN HIS LIFE FOR HIS FRIENDS”— were spoken by our Lord Jesus Christ (John 15:13) directly after the command that His disciples love one another as He loved them. Jesus loved to the point of death for the sake of the church, and the command to love with that very same depth and commitment applies to all believers.

The application of this treasure of a truth to the deaths of soldiers in battle is in some ways appropriate. For a soldier to engage in battle is not merely to obey but to be brave, brave enough to care for something so much that he is willing to die for the sake of it. War is never the ideal, and many wars are worse than that, being constituted of greed, desire for power, domination, and the other base lusts. However the most ideal form of the less-than-ideal path of war must be one that is purely fought in order to protect the freedom and lives of people against a violent aggressor. So those soldiers who die, while defending those who are helplessly in harm’s way, commit a great deed of courageous love.

Naturally, there are important differences between the sacrifice of the soldier and the sacrifice of the martyr, and yet these surface differences point to deeper similarities. The soldier willingly enters a profession in which he must be prepared, if necessary, to take lives and to have his life be taken. This may not seem necessarily to be the case with a Christian, who is called to promote his faith peacefully and in the minds of some, such as this commenter on a previous blogpost, live a harmless, harm-free life:

This "Seeker" is apparently surprised that a Christian should suffer for his faith. Personally, I’m more surprised by his surprise. Continuing in the same passage in John 15, Jesus clearly expects that His followers will undergo hardships and is preparing them for what lies ahead: “If the world hates you, you know that it has hated Me before it hated you. If you were of the world, the world would love its own; but because you are not of the world, but I chose you out of the world, because of this the world hates you. Remember the word that I said to you, ‘A slave is not greater than his master.’ If they persecuted Me, they will also persecute you…” (John 15:18-20).

The words of the Lord convey not merely expectation of trouble but also encouragement in the midst of it, “These things I have spoken to you, so that in Me you may have peace. In the world you have tribulation, but take courage; I have overcome the world.”

If this is so, then why, as the questioner above asks, doesn’t God rescue all Christians from persecution, torture, and death such as when God rescued the three young Hebrews from the furnace in the book of Daniel? Certainly, God can save us and many times He does. Why not in all cases?

Returning to the Gospel of John, we find Christ praying the “high priestly prayer” for the disciples and for those who will believe in Him through the disciples’ testimonies, He says, “I have given them Your word; and the world has hated them, because they are not of the world, even as I am not of the world. I do not ask You to take them out of the world, but to keep them from the evil one. They are not of the world, even as I am not of the world. Sanctify them in the truth; Your word is truth. As You sent Me into the world, I also have sent them into the world.” The hatred that Christians receive is a testament to the fact that the world is in rebellion against the Creator. Every Christian who professes his faith in Christ as the risen Lord and Savior should comprehend that the cost of one’s own mortal life may be demanded of him. If Christ was hated unto death, then why should we imagine the same end for ourselves to be out of the realm of possibility? As are the soldiers on earthen battlefields mortal-conscious, so ought to be the soldiers of faith in the realm of spiritual fray.

The gospel—even in the gentlest of presentations— is an offensive stumbling block to the proud and wayward soul. People often prefer the darkness to the light because their deeds are evil. Perhaps the soul, averse-to-convert, fears that the evil is all there is within him and if that is gone, he will be no longer; his fear deludes him into believing that violence and persecution are merely self-defense. In a way, he is right. To be identified with Christ is to die to one’s imagined claim to oneself, but if a person’s identity is utterly bound with his sin, then he may prefer to kill the one who bears the news that he must die to it.

While soldiers in war may advance their cause through killing, the soldiers of faith ask of their enemies to allow enmity itself to be killed, so that enemies can become brothers in the family of God. The soldier of faith risks his life to share this message because he knows that only those who allow the true Light to shine upon and transform the dark places of the innermost heart discover the peerless joys in being a new creation.

Whether it is in a spiritual or physical sense, Christianity has always, always been about dying in order to live. Thus, onward Christian soldiers. Be not afraid. The Lord is with you.
Posted by Unknown at 5:24 PM