Loathe Thy Neighbor? Don't Pray for Paris? A Response to the Responses to #PrayforParis

One of the recent disturbing absurdities that has become increasingly common in response to reports of tragedies in the news is the attempt to redirect sympathy elsewhere by diminishing the importance of the original report. The image below, circulated on social media within hours of the massacre in France, in which over a hundred people were murdered and hundreds more wounded by Islamic terrorists, is a prime example: 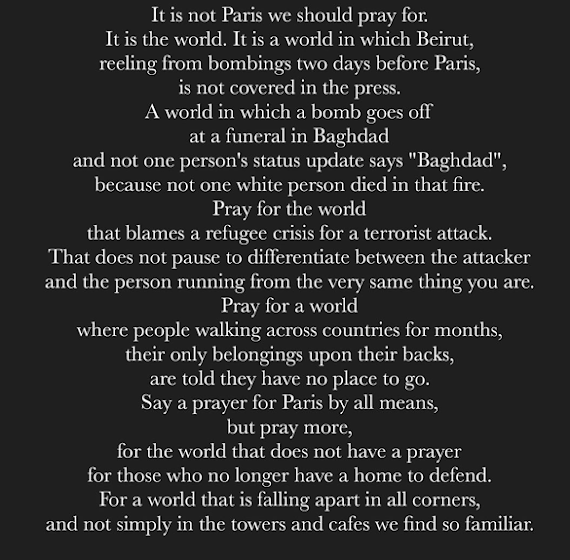 Aside from some of the more obvious fallacies inherent in this kind of manipulative propaganda exists a more basic and fatal flaw, namely the implicit notion that human compassion must be limited and thus only distributed to the most worthy of causes.

The result of this implication is that supporters of various causes raise competitive clamors, “Our tragedy is worse! Care about us not them!” as if pity is a sport, and everyone can only be loyal to one team, while despising all the rest. See the following example of a tweet condemning expressions of solidarity for Parisians in the wake of this devastating mass murder rather than the more legitimate concern regarding “microaggressions" at #Mizzou.

We may speculate that perhaps one reason why the “limited compassion premise” is hidden is that while its users are aware that compassion is not limited, money, resources, and political influence are. Therein lies the real competition: “How can I make people care for, contribute to, and spread the word about my issues before they exhaust themselves and their pocketbooks elsewhere?”

Now even if we allow for people to run out of compassion, weirdly, the “limited compassion premise” is even extended to God and prayer. Don’t pray for Paris, we are told, as we must instead pray for Iraq or pray for Syrian refugees or pray that everyone will start posting about why #BlackLivesMatter. God’s infinite compassion and all the treasuries of heaven are not enough for the world, apparently.

“Oh well you mustn’t pray for Paris specifically, but we shall allow you to pray for the world,” our sage and righteous social activists inform us, thereby revealing their blindness to the human heart. Time, space, energy, and earthly life spans may be limited, but not love. Love is the renewable resource, so much so that it increases the more it is spent. Just as a muscle grows when exercised, the spirit expands when it loves, yet the spirit is not bound in space and time as a muscle is. Thus, a love that springs from a connection to the ultimate source of Love, viz. the triune, eternally-existing God, can be limitless.

The enlightened social justice warrior scolds us narrow-minded people for only caring about what happens to the “towers and cafes we find so familiar” instead of more distant, exotic locations. False dilemmas and mistaken assumptions abound, of course, but there is also a failure to see that love begins with the familiar because love begins with family. Love towards my actual neighbor, the people I know and see everyday--whether in seeking to console, speaking hope and light into a darkened mind, or providing for an essential physical need--grounds me against the merely abstract form of “love,” which for some appears as nothing but a passing whimsy of concern.

Everywhere, someone is hurting. The mistake is to think that the importance of one kind of tragedy obliterates the importance of another. It is a mistake to think that by loathing our family and neighbors, we will show more love towards other nationalities and races. In the long-run, this oh-so-urbane self-loathing diminishes the empathy for all causes, even the "right" [or is it "left"?] ones. Furthermore, it is elitist and tribal, thereby serving as the very stuff of opposition and violence.

By caring for those who are close, we train ourselves to see those distant people as neighbors, who can and must be loved. How can I help the distant neighbor? By encouraging active love in my home. Then in my neighborhood. Then in my city. Then in my country. Then, and only then, in my world.