Searching for the Atheist Refutation of Jeffrey Dahmer

Jeffrey Dahmer was an American serial killer who raped and murdered 17 men and boys. He is chiefly remembered for cannibalizing some of his victims.

In his last interview on Dateline NBC, Dahmer explained that he had seen no reason to control his depraved urges, because he didn't believe he would have to answer for his actions. 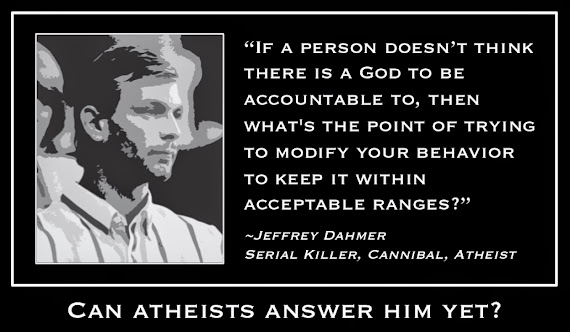 I'm obviously convinced that Dahmer was wrong, but it's because I believe that there is an ultimate standard of right and wrong and that we are all accountable for our actions. When I was an atheist, I agreed with Dahmer that, in an ultimately meaningless world where humanity is a cosmic accident, we might as well do whatever we feel like doing.

Interestingly, Dahmer and I both eventually realized that we are accountable (because there is a standard of right and wrong) and that we will all stand before him. Here's the full quote from Dahmer:


"If a person doesn't think that there is a God to be accountable to, then what's the point of trying to modify your behaviour to keep it within acceptable ranges? That's how I thought anyway. I always believed the theory of evolution as truth, that we all just came from the slime. When we died, you know, that was it, there is nothing. And I've since come to believe that the Lord Jesus Christ is truly God, and I believe that I, as well as everyone else, will be accountable to Him."