I just ordered my copy of Bart Ehrman's new book, How Jesus Became God: The Exaltation of a Jewish Preacher from Galilee, along with the response book, How God Became Jesus: The Real Origins of Belief in Jesus’ Divine Nature, by Michael F. Bird, Craig A. Evans, Simon Gathercole, Charles E. Hill, and Chris Tilling. While I wait for the books to arrive, here's a brief assessment by Craig Evans.

Posted by David Wood at 7:47 AM No comments:

Why Is Christianity Different from Other Religions? 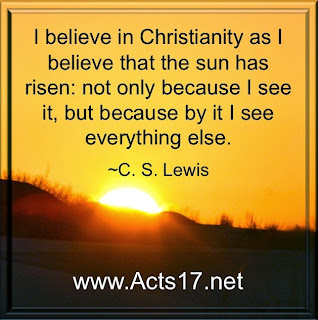 While many atheists and agnostics are hostile to religious claims (and especially to Christian claims), some atheists and agnostics are a bit more friendly, regarding all religious claims as equally valid and meaningful for individuals, even if they're not objectively true. So if my religion teaches that Jesus rose from the dead, and Nabeel's religion teaches that Jesus didn't rise from the dead, we're both right, because religious claims aren't the sort of claims that are judged by normal standards of truth and falsity. What's true for me may not be what's true for you.

Needless to say, Nabeel and I were quite confused by Marie's statement. We didn't believe for a second that all religious claims were equal. We wouldn't have been arguing if we thought that!

Religions are not all the same. Christianity is different from other religions in two main ways: (1) what it teaches, and (2) what confirms it.

In the following video, Greg Koukl briefly discusses why the message of Christianity is different:


As for confirmation, God raised Jesus of Nazareth from the dead in order to confirm his teachings about his sacrificial death and divine nature. Christianity, then, has God's stamp of approval. Do other religions have anything like that?
Posted by David Wood at 6:34 PM No comments:

Email ThisBlogThis!Share to TwitterShare to FacebookShare to Pinterest
Labels: Christianity

Greg Koukl: Did Adam Have Libertarian Free Will?

Libertarianism is one of three main positions (the others being Hard Determinism and Compatibilism) in discussions about free will and determinism. Libertarian free will includes, at a minimum, some degree of indeterminism (the future is not completely determined by the past) and the ability to voluntarily do otherwise (i.e., a person has a genuine ability to do X or not to do X, with both options being under the control of the person's will).

In the following video, Greg Koukl discusses whether Adam had Libertarian free will.

Email ThisBlogThis!Share to TwitterShare to FacebookShare to Pinterest
Labels: Free Will

William Lane Craig: Theism, Atheism, and the Need for an Explanation of Objective Moral Values and Duties

In the following video, William Lane Craig compares the explanatory power of theism and atheism with respect to objective moral values and duties.

Dr. Scott Oliphint of Westminster Theological Seminary explains the relationship between apologetics, philosophy, and scripture in what he calls "Covenantal Apologetics."


PART THREE
Posted by David Wood at 1:32 PM No comments:

Vince Vitale: God Is Not Dead