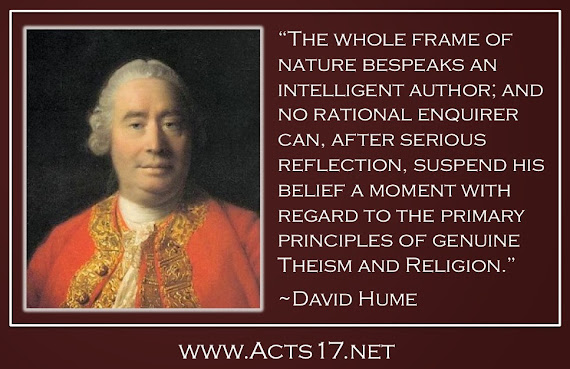 If All Religions Are True, Then God Is Cruel In 2003, the short-film Most made its way onto the big screen. A brilliantly moving piece of cinema, the film tells the story of a single father who lives with his son in the Czech Republic. The pair share simple yet content lives together. The father works as a bridge engineer—he  was responsible for raising and lowering a massive draw-bridge that allowed ships and trains to pass, at scheduled times. One day, the boy happened to be at the bridge with his father. As he’s playing outside, he notices a train rapidly approaching the station.
It was an hour early.
The bridge was up.
And the train was heading right towards it.
He yells and shouts at the window of his father’s booth, but to no avail. The train was quickly running out of track and the bridge needed to come down. Hundreds of people were potentially onboard. So the boy decides to manually lower the bridge by pulling a lever near the tracks. In a heart-stopping moment, he accidentally falls into the gear-works that enable to bridge to operate.

A series of heavy, metal gears and levers surrounded his body on all sides. The flicker of movement catches the father’s eye. He turns to see his son fall into the gear-box and lie helpless there.
Realization dawns upon him.
If he lowers the bridge, the gears will crush his boy.
Left with the soul-shredding decision to kill his boy, he cries and screams and punches the wall. With only moments to deliberate, he reluctantly pulls the lever. He hears the gears turn and lets out a guttural scream.
The camera then moves and presents us with the haunting image of the boy’s lifeless corpse.
Hundreds on the train were saved, but at the biggest price to the father. He killed his son.
Now picture the same scenario, but with a twist this time. Suppose the boy had fallen into the gear-works and the train was rushing towards the raised bridge, but this time, the father had two levers: one to lower the bridge and kill his son (like in the original scenario) and one to divert the train onto an alternate track that took it over a second, parallel bridge. It would be madness for the father to choose the first lever and kill his son with the second lever being right within reach! Why on earth would he kill his son when he knows fully well that the second lever is capable of saving both the lives of all the train passengers and the life of his son? Such a decision would be utterly appalling. Only a monster would choose the first lever.
And yet this is exactly what religious pluralists make God out to be.
"All religions are true."
"All religions lead to God."
"All roads lead to the same destination."
While I can understand the sentiment of inclusivity, this idea creates an evil God. If all religions are true, then God is cruel. And not just cruel--God is an incompetent, cosmic child-abuser. If religious pluralism is true, then God is the father in the second scenario. He saw the train coming and he decided to pull the first lever and kill his son, rather than pull the second lever. If Islam, Buddhism, Zoroastrianism, and all the other world religions are true paths to God, then why did God kill his Son, Jesus, in order to make a way for men to come to Him? The very notion is absurd and insulting to God. It paints a portrait of a God who is just plain cruel. He sent Jesus into the world to live a miserable life of scorn, rejection, poverty, betrayal, humiliation, sorrow, and ultimately, torture and death, in order to create a path whereby men can come to know Him, all the while knowing that following the Five Pillars of Islam or the Noble Eight-fold Path could accomplish the very same thing! What a waste! Jesus' life--God's plan of salvation-- is completely in vain for the same result could be achieved through persons simply adhering to the tenets of any world religion. God is not only cruel, but incompetent for putting into effect the worst salvation plan possible.
But God is not cruel. He is not incompetent. He would not kill his Son needlessly. He would not put into effect a ridiculous or cruel salvation plan for mankind. Hence, religious pluralism cannot be true. This does not show Christianity to be true, but it does show that not all religions can be true, for if they were, then God would not be a God of love--He would be a cosmic sadist or an incompetent guardian of the universe, or both.
Posted by Paul Rezkalla at 12:58 AM No comments:

Immanuel Kant: The Starry Heavens and the Moral Law 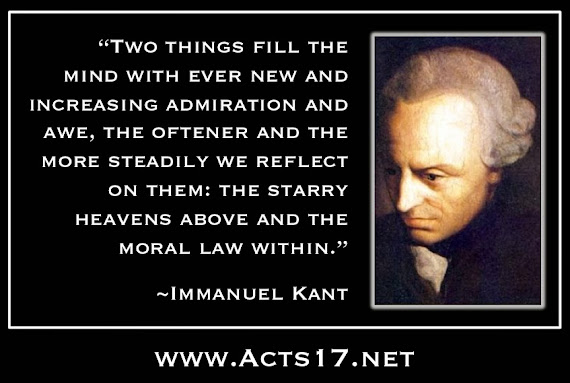 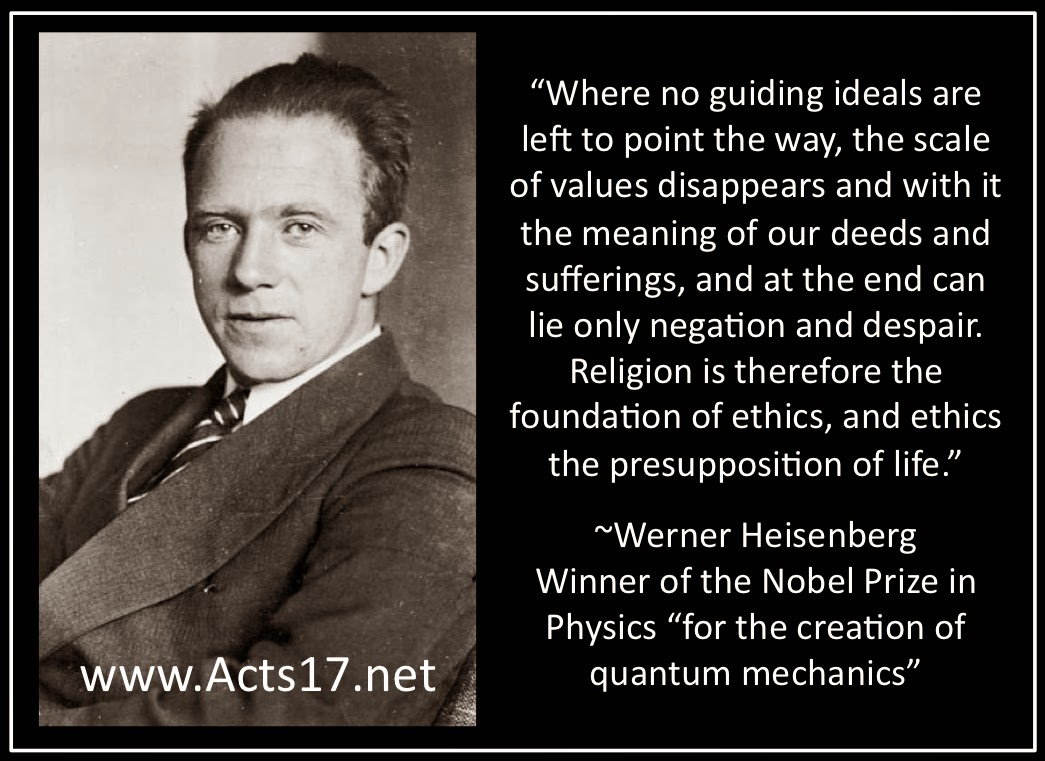 Posted by David Wood at 9:55 PM No comments:

Ravi Zacharias: Do You Lock Your Doors at Night?

Can Science Answer All Questions? In the movie Contact? Ellie told her father that she loved him, but she couldn't prove it scientifically. That’s because science can't do that sort of thing. Science can't show that two people love each other. Science is simply a tool that we utilize to uncover facts about the observable universe. So here’s a fun fact: Science is not omniscient. It cannot answer all our questions. Not by any stretch of the imagination. And the idea that we can’t know anything unless we have scientific evidence for it, is ridiculous. The claim 'We can't know anything unless we can verify it scientifically' cannot, itself, be verified scientifically. That kind of argument is self-defeating. Interesting, no? So when someone says, "There's no scientific evidence for that, therefore I won't believe it", I can respond by saying either:
1. Your face has no scientific evidence
or
2. There are things that we know to be true apart from any scientific evidence.
I find the latter to be more efficient, although not nearly as epic.
Here are are 2 categories of facts that we all accept without help from science:
1. Metaphysical Facts
Metaphysics, by definition, lies outside the realm of science. The term ‘Metaphysics’ means ‘meta-physics’ or ‘beyond physics’.  Metaphysical facts include the existence of other minds, the existence of the world outside of your own mind, and the reality of the past. We believe that there are minds other than our own, the external world is real, and the past wasn't created 5 minutes ago and given only the appearance of having aged as it did. These beliefs are what philosophers call properly basic beliefs. That means that they are foundational. We can't show them to be true or false. We accept them as facts without question, but they cannot be proven by science.
Science cannot tell me that there are minds other than my own. When I’m in a lecture, I assume that the professor who is lecturing is a real entity with a mind and not simply a figment of my imagination or a part of my dream (as much as I’d like to think so). I treat the world around me as if it is real. I could be stuck in the matrix or I could be a brain floating in a jar of chemicals being stimulated by some crazy scientist who is giving me the illusion of this world. But I know I’m not. I know that the past is real; I was not created 5 minutes ago and implanted with 22 years’ worth of memories. I comfortably believe all of this and yet there is no scientific evidence that confirms it.
2. Ethical Facts
A lot of interest has been generated recently in the field of Evolutionary Psychology. Some experts in this field have argued that we can get morality from understanding who we are as social mammals. The idea of the purely ‘selfish gene’ is slowly being understood to be false, or at least an incomplete picture of who we really are. We are not simply lone mammals on the quest to propagate our DNA at all costs—there is a complex social infrastructure in mammalian groups/herds that has an inbuilt morality for the purpose of helping us deal with each other. Elephants bury their dead, bonobos comfort each other after loss, and most primates understand and operate by the laws of reciprocity and justice. This explains morality, right? Science has given us ethics!
Just a minute, buddy. Let's not get ahead of ourselves. This kind of argument commits what David Hume articulated as the            Is-Ought fallacy. You can’t get an ‘ought’ from an ‘is’. This means that observing and understanding how things are cannot tell us that this is the way things ought to be. Just because we observe that mammals help each other doesn’t tell us that we should help each other. Well, maybe we can say that we ought to help each other because that increases human flourishing. Right? Ok, but that presupposes that human flourishing is good and should be striven towards. But why is increasing human flourishing good in the first place? Why should we pursue it? Any answer that one gives to that question will not come from science. That's because science is descriptive, not prescriptive. The ‘should’ or ‘ought’ has to come from elsewhere. Science can’t give us that.
Science doesn't tell us that rape is evil. Science can't tell us that rape is evil. The value judgment, evil, lies beyond the scope of the scientific method. Sure, science can tell us that rape can have biological and psychological repercussions on individuals and societies, but to say that rape is evil is not something that science can do. We know that rape is evil wholly apart from science.
Science can't answer questions beyond those about the observable, testable world around us. Trying to do so is akin to using a yardstick to find the weight of a bucket of water. It won't work because that isn't the correct tool. My point here is not to say that science is bad. Not at all. I love science. Science has given us, and continues to provide us with progress in health and understanding the world around us. But we should not try to apply science outside of the fields for which it is meant.
Posted by Paul Rezkalla at 2:02 PM No comments:

Does God Have Free Will?

Does God have free will? If God cannot act contrary to His nature, then is He really free?

Posted by Paul Rezkalla at 9:48 AM No comments: